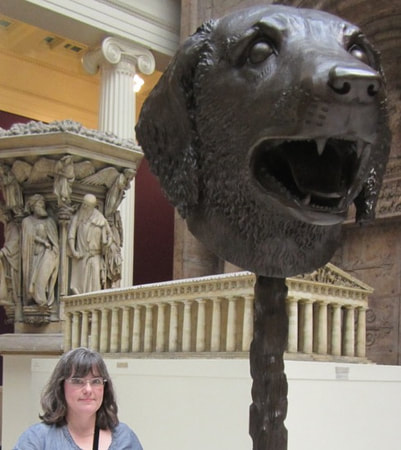 Was at Carnegie Museum of Art visiting Ai Weiwei's dog.
Ann Marie Falcone
Some quotes about my teaching and surprise affirmations about my singing from unintended "audience members"﻿﻿﻿ (see story below the quotes) ---

"Thank you for being such a wonderful teacher, Miss Falcone. I graduated with a General Music Degre﻿e from Hiram College, and I got the Internship for the Summer I wanted in Severance Hall in the Cleveland Orchestra's Library!"  -- D. H.

"Your music program has made *such* a difference for him [my son]- he uses music to relax and is just so fired up to learn more and    more- thank you!!!" -- parent of 10-yr.-old student

"Thank you for teaching me more music. You are a good piano teacher. I will miss you. Love, C" [Student had to move away. :( ]

﻿The Sun Press, Thursday, ﻿January 24, 2013: "Holt, 17, started piano lessons at age 6 and continued for nine years. She had played the ﻿clarinet since fourth ﻿grade, but said she didn't become serious about the instrument until 2008. That was when she started taking privat﻿e lessons from Ann Marie Falcone, whom Holt called 'a really great friend. We just have fun,' she said. 'My lessons are the highlight of my day. She just has a unique way of explaining music.'" -- C. H. in interview before performing her Senior Solo at CHHS

"Dear Ms. Falcone, Thank you for all you have done for the last year and a half. Not only did you help me in loving to play clarinet, you helped me gain a sense of dedication and a lot of confidence in myself. With your guidance, I was able to achieve goals which I always thought were out of reach. Thank you" -- E. K.

"My son. . . has been a clarinet student of Ann Marie Falcone for the past three years. We have nothing but praise for the dedication, enthusiasm, patience, and high quality instruction that Ms. Falco﻿ne has provided our son. Ms. Falcone's encouragement and guiding hand has been integral to his progress. She has always challenged him with serious music and led him along to where he believes he can tackle any piece of music-- no matter  how difficult." -- D. H., parent of former student

"You turned me into a pretty decent clarinet player. I didn't even know how to tongue my reed, use my air correctly, and I had lessons from different people for 3 years. It was due to your wonderful teaching and encouragement that made my growth as a clarinet player astonishing. Believe me you are an amazing teacher. I hope I can do the same for my students one day. Keep that passion burning strongly, Ms Falcone. We need more people like you in the world." -- P. H.

"With many thanks for your patience, your humor, your enthusiasm, your encouragement, and perseverance through it all." -- The Members & Parents of The Trio

Robert Rollin on Il Trovatore, clevelandclassical.com: “Later the wonderful timbre of women’s chorus intermingled with the excited voices of Manrico and Count Luna locked in combat and provided some of the opera’s best moments.”

Surprise Encouragement from “Audience Members”: A Few Days from my Journal kept during a Summer Writer’s Workshop I had to do for the MFA. (Also See the Vocal Practice Page)

July 22, 2017: Walked to a different part of the woods and sang in the evening of the 20th. Along with another deer and rabbit, I thought the grasses, nearly as tall as I am, sunflowers, assortments of purple wild flowers, trees, and red berries were the only things that could hear me. Then I noticed a classmate walk down the hill and set up a mat to do Yoga.
I said, "I'm singing. I will bother you."
She said, "No. I heard you as I got closer. It was lovely."

That was nice for her to say. Lovely, though, I keep going flat on that one Disney song. After thirty-five minutes, I felt something on my toe. I looked down, screeched, and flicked it away. On my way back up the hill, the classmate in Tree Pose asked, "Are you okay?"
I said, "I think it was a leech on my toe. It was black, squishy, and crawling, and I didn't know if it would bite me. I should have taken a picture of it." It was as long as and thicker than my middle finger, ick.

As I walked the path back to the dorms, another classmate said, "Was that you singing?"
I said, "Uh oh. I was way down the hill in the grasses, saw another deer and rabbit, how could you hear me?"
She said, "I didn't know where it was coming from. It was so pretty. It's a good thing I could hear you."
I said, "I had to stop. There was a leech on my toe. It's getting dark, anyway. But there's nowhere to sing."
"It probably was a slug. There are lots of slugs around here."

The next morning, our MFA program helper said, "Professor Ira said you have the voice of an angel."
"I didn't know anybody could hear me. There's nowhere to practice. [I've read and at some point somehow have been led to believe] I'm too old to have an opera career [as an opera singer who plays actual roles.]"
She said, "Will you sing for us at open mic?"
I said, "I haven't performed in front of anyone in a few years. And I've only warmed up on the weekends for the last two. I need to practice."
I thought open mic was for the writers, and she was being kind. I needed to practice, and it wasn't on the schedule. Maybe another time.

This morning, Professor B.K. walked up to me in the breakfast line. "You have a beautiful voice."
Poor Professor B.K. I didn't just say thank you and move on; I told her much of my musical life story in 120 seconds. "I haven't performed in front of anyone in years. I have a Masters in Clarinet.  I had years of voice lessons. I composed a piece. I'm writing two opera-type things. I'm too old to be a Diva. I came to write my memoir to get to the other side. I studied with many great clarinetists. I have some professional singing experience...."
Then she said, "I know this is going to sound cliché, Ann Marie, but it is never too late."

July 24, 2017: Nice and sweet people surround me here. Went to a different part of the fringe of the woods last night. Many people left for the day and evening, as we were on our own for dinner. Warmed up, sang several art songs, a couple Disney pieces. Some beautiful yellow bird flew back and forth directly in front of me, creating a wave pattern. I wanted it to come to me. Then, I saw its love, and they met each other on a tall flower.

I was having women menstrual issues at this workshop. I had surgery for stage 4 Plus endometriosis years ago. Honestly, singing makes me feel better.

In the morning, I walked in at the end of the breakfast service, as usual, and Aspen had sunflowers in her hair.
She said, "Ann Marie, was that you singing last night?"
"Yes."
"It was beautiful." She continued with compliments in her extraordinary lyric writing voice, one I can't imitate here on paper. I can't remember all her exact words. I folded my hands in prayer position and bowed slightly toward her.
"Thank you. I've practiced very hard."
She said, "You are amazing."
"Oh, I wouldn't say amazing. Yes, I think I'm very good. It's too late for me to have a career [to play roles as a Diva would.]"

If people hear me, and it makes them feel better, too, then that's an important and nice contribution, too.
Hence Max late last night said, "I could hear you singing, today. It was very pretty."
"Oh, thank you," I said.
"No really, it made my entire day," he said.

The breakfast was frittata, sweet potato hash, oatmeal, sausage, and watermelon. I took small amounts of all, except the sausage. It makes my stomach hurt. Two minutes late for class, and Prof. Ira is a Buddhist. The Dalai Lama showed us at his week long talk at Lehigh University in 2008 to never be late, oops. I returned my plate to the kitchen.
Chelsea was practically running her plate into the kitchen. "Your voice is gorgeous. I mean opera worthy, really."
Oh dear...
"Well, thank you….”

​THE END
– I have to figure out how to keep using my talents to benefit the Universe and its inhabitants; two original operas won't be so bad to leave behind. Maybe I can make a cameo in one of them someday. :) Hee hee; it's never too late, right?


--The recordings at this website are mostly from live performances, daily practices with an iPod, video recordings I made during the pandemic,  one CD project made at Cleveland State years ago, and one studio recording project for the first opera made years ago, only. I work with professional and amateur pianists at any given time.--